Seven puppies IS a lot for mom but Avery is doing a wonderful job with her babies! 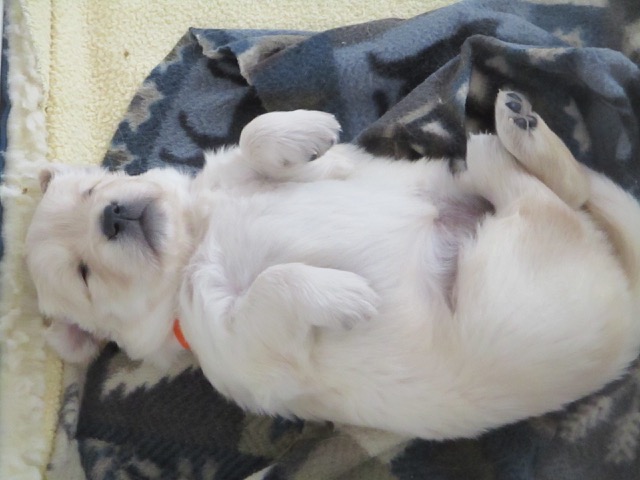 I can hardly believe the Rooster X Avery puppies are already four weeks old! Time seems to just fly by!! I am so thankful Sandy, who chose Rooster for the sire of Avery puppies, keeps me “in the loop” by sending puppy photos. And here I share those photos with you…

Barn Duties With the Dogs! They LOVE the snow!

Well, they did predict we would be getting snow… And they were correct! January 2018 goes out like a lion dumping a good 18-24″ of fluffy white stuff! (Personally, I had told hubby we would need to pull out the hose to “winter water” our trees this weekend because we’ve had such a dry winter so far. Well, he must have been in cahoots with Mother Nature (because winter watering trees is NEVER a fun thing to do!) so now he doesn’t need to worry about  doing it this weekend!

The dogs absolutely LOVE the snow! Blitzing here and there hoping to chase up a bunny or two, they plow through the drifts enjoying every minute of Mother Nature. Even Beanie, our “honorary” Golden Retriever keeps up with the big dogs; she is not about to let those dogs do anything without her!

Out to do “barn chores”, the donkeys are less than thrilled with the snow. They carefully keep their distance to stay OUT of the snow much preferring the overhead roof that allows shelter from the elements.

Now tired, the dogs individually lick off the “snowballs” built up on their feet. And then, a good nap was had by all! You just can’t beat “playing in the snow” to exercise/tire out the dogs!

Puppies smell “mom” and make their way to the “milk bar”!

Aww… Miss Lavender seems lost in finding mom! How cute to see pups squirm to get to the “milk bar”! Mom is Avery; pups sired by our boy, CH Rooster.

While it may seem like a good idea to help this puppy, it is so important for the puppies’s development to move on their own. If helped, which I frequently do with my puppies, it can lead to development delays in learning how to use their legs to walk later. Having had this problem with my last litter of puppies, I will, from now on, cheer them from afar as they learn to move on their own!

P.S. Thank you, Sandy, for sending me this vid! Too cute to NOT share!!

Miss Lavender negotiating her way to the “milk bar”

Jema’s Strutting My Stuff having a blast at a recent agility trial!

It is wonderful when dogs can be multi-purpose excelling in a variety of venues! Here is “Strut”; one of my “puppies”! All grown up and competing in agility trials now. Kudos to his owner, Michele, for not only the training she does with all of her dogs but also the mutual love and adoration she has for her dogs! I couldn’t ask for a better home for one of my “puppies”!

So happy to hear Avery and pups are doing well. 5 girls and 2 boys!

HUGE congrats to Miss Avery whelping her 7 puppies (5 girls; 2 boys) in the wee hours this morning! Rooster? Well, the guy is definitely smoking his cigar patting himself on the back, LOL!

Mom and puppies are doing well, I’m told. I predicted Avery’s due date to be tomorrow; I guess the babies were ready sooner so… Here they are!

New owners are thrilled with their puppy! Always good news to hear!!

Rooster X Trevi puppy, Gaddy, (formally Mr. Blue collar) in his new home. At 10 weeks old, I’m told he has a good grasp of all primary commands. His owner also states how incredibly smart he is! 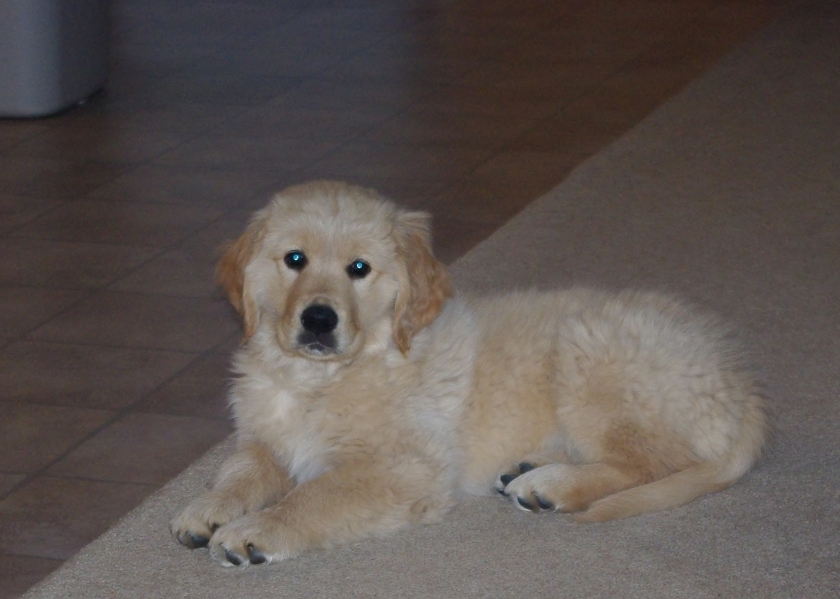 LOVE hearing puppy news and how pups are settling into their new homes. And to think that more puppies are expected next week by Rooster with Avery… I can’t wait to hear how the whelping goes? How many? How many boys and how many girls? I’ll keep you posted…  (Wishing Sandy an easy whelping preferably not at 3 a.m.! Crossing fingers for a healthy litter!!)

I woke up this morning to receive such a wonderful surprise! Puppy evaluations and stacked photos sent to me from Sandy. I am totally smitten with each and everyone of these puppies! GORGEOUS BABIES!! Good job Rooster x Trevi!! And THANK YOU Sandy for coming to Rooster with your sweet and beautiful girl!!

I’m told this fellow can pick up and retrieve a thrown duck!

A good time was had by all! LOVE those smiling faces!! 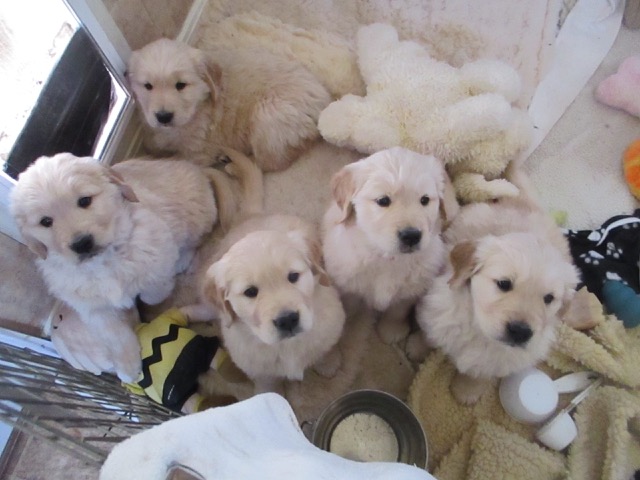 The darling puppies are now 6 weeks old; time sure does fly by! I’m told they are chunky weighing between 12-13 lbs a piece! Look at those beautiful heads!!

Sandy has wonderful play areas set up for all her puppies to explore both inside and outside (weather permitting). These are going to be very well socialized puppies! 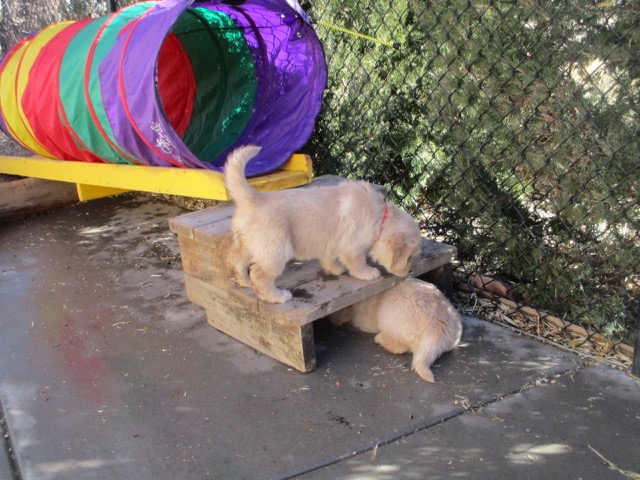 As the nights get colder, it is definitely time to help the “littles” to stay warm. Cali, the Cavalier King Charles Spaniel, is my old girl with achy joints WITHOUT the weather contribuiting to her discomfort. She LOVES her new polartec vest that helps keep in her own body heat. This vest is light enough to wear in the house as well as outside. I love the lime green color on her!

Meanwhile, our newest adddiont, Beanie (French Bulldog) definitely gets chilled as the temps drop. She, too, is wearing a polartec vest that isn’t too tight on her ample chest girth! Beanie, as opposed to Cali who is “easy”, fights me putting on her vest. It is like dressing a two-year-old! Still, she seems to like the vest once it is on.

Pups are growing up so fast! 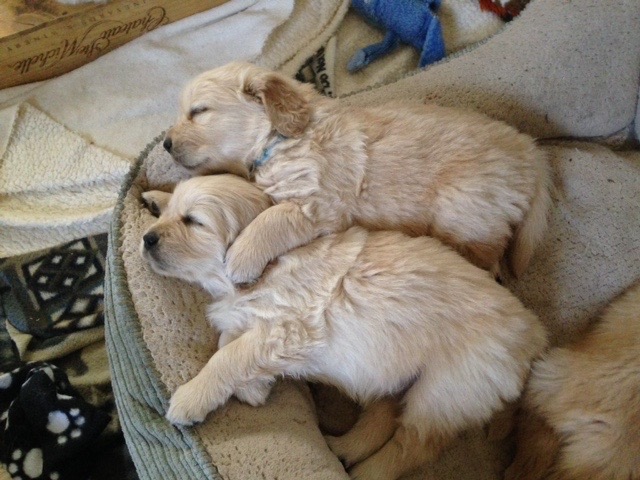 I’m very thankful that Trevi’s breeder sends me photos and updates on the Rooster x Trevi puppies. I can’t think of anything as cute as a Golden Retriever puppy! At four weeks of age, pups are more active and personalities are developing. I wish I lived closer in order to indulge in that sweet puppy breathe! They all are so darling!! 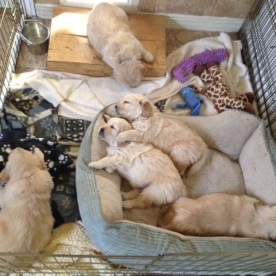 Training, showing, and living with our dogs has greatly enriched our lives. We occasionally breed and have puppies available to qualified homes. If you are interested in one of our puppies, please fill out our “Puppy Questionnaire” and/or Contact Me! to inquiry about possible upcoming litters.